Home » Blog » Tired of Adolescent Pushback? Here’s how to Understand and Cope with Defiant Teens 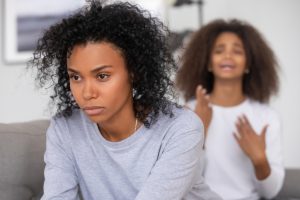 Teenagers can push your buttons like no one else. Teens with ADHD–living through the hormonal turmoil of adolescence in addition to struggling with executive functioning challenges such as impulse and emotional control, organization and motivation,  can simultaneously need your support and reject your concern. Unable to skillfully self-regulate, small issues can escalate into volcanic eruptions within seconds. The conflict is as frustrating for you as it is distressing for them. Nobody wants to live in a home marked by anger, yelling and unhappiness amidst frequent provocations. How can you reduce your family’s arguments and find better alternatives?

Teenagers push back against their parents as part of their quest to answer the two major developmental issues of adolescence: “Who am I?” and “Where do I belong?” When teens are defiant–rebelling and questioning adult authority–their behavior reflects their burgeoning efforts to separate from their parents and other caring adults while still maintaining their connection. Learning to navigating these attachments while forming your own identity is extremely complicated. It’s a push-pull dynamic inside of them. They want to exercise their independence by making their own decisions and rejecting parental directives but they also rely on their folks for support, guidance and acceptance. They feel confused and resentful but lack the self-awareness and maturity to make more effective choices. 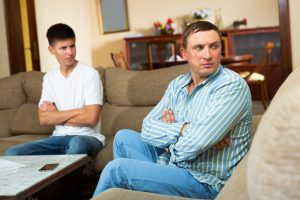 Defiance is a relationship problem: communication has broken down and no one feels listened to. Teens become increasingly defiant and reactive when they feel like their needs or opinions are unseen and unacknowledged. They are still struggling with how to pivot when faced with limits they don’t like and tolerate disappointment. As their parents, they need you to meet them where they are: to focus more on your relationship than being right. Expect their  pushback and create a predictable plan for dealing with it–regardless of the content. It’s okay for teens to feel angry at their parents for saying “NO” but it’s not acceptable to rage at them, to break things, to damage the house or threaten others.

Defiant teens often feel bad about themselves after these episodes. They regret their outbursts but will frequently hide their shame rather than let you see their vulnerability. What they need are tools to manage their intense feelings:

Remember, they don’t want conflict in your home any more than you do. They just don’t see other ways to get what they want. Working collaboratively and using STOP, THINK, ACT can further reduce your arguments and their surliness: